Rebellious teenage orphan Ricky Baker (Julian Dennison) is shipped off to live with a foster family in the New Zealand countryside. Unhappy with his new surroundings, he attempts to run away and hide in the unforgiving wilderness. His reluctant caretaker Hector (Sam Neill) eventually finds him, and the unlikely duo survive in the harsh terrain as a nationwide manhunt is launched to find them.

Chalk this one down to not living in one of the big cities. I missed it the first time around, then it left and then it came back to theaters. I wasn’t going to let it get away from me again. No, I haven’t seen What We Do in the Shadows but I am familiar with director Taika Waititi and his quirky brand of comedy.

Ricky Baker (Dennison) is an orphan born on the wrong side of the tracks. In an attempt to straighten him out, he is sent to live with a foster family in the New Zealand countryside. This comes as a big culture shock for him. It’s probably easy to guess what happens next, but it’s better than than what you’d expect. Once he learns more about his foster parents, Hector (Neil) and Bella (Rima Te Wiata), and the area, he is persuaded to stay. After a freak tragedy, Ricky is forced to leave his new foster home. In revolt, he runs away into the wilderness, getting lost and eventually being found by Hector.

Hounding them was Ricky’s over-the-top social worker Paula (Rachel House). She had taken great offense to Ricky’s unwillingness to leave and made it her mission to get him back. The plot escalates when Ricky and Hector become fugitives with the whole nation on the hunt to find them. The two must move around, trying to survive by living off the land, running into countless quirky characters along the way.

What is noticeable early on is the contrast between Hector and Ricky. Hector knows how to survive off the land and Ricky has absolutely no clue. Since Ricky is a newcomer to the wilderness, watching him learn to survive was entertaining; it’s easy to get invested in this character, because he’s so likeable. Hector wasn’t much of a fan of Ricky initially, but over time grew closer to him as he started to break down his own walls. Their chemistry made them dynamite together as the film experimented with the generational gap between the two resulting in amazing exchanges from the smart and comical script.

The acting here was excellent with Dennison and Neill carrying the film. Dennison stole the majority of scenes, often looming above the more experienced Neill.  His screen presence and likability allowed him to stand out in many scenes and his charisma made him a believable kid from the streets. All the people they met along the way were pretty much caricatures, but their quirkiness was very endearing addition to the mix. 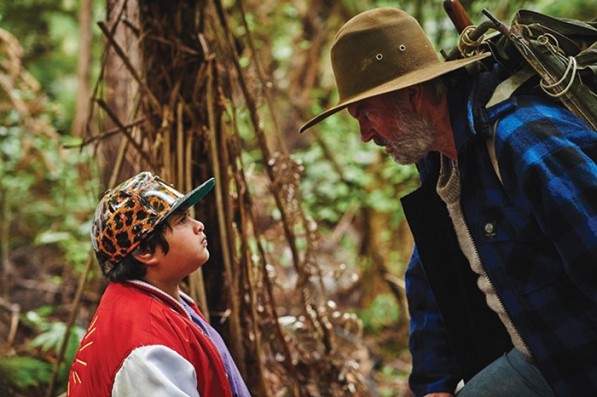 It should be mentioned that the film’s cinematography showcased the beauty of the New Zealand wilderness adding intrigue to the film. This was just a very beautiful film to look at if anything else. While the film is mostly focused on Ricky and Hector, there is still more depth to this coming of age story.

I have a particular set of skills .... which are mostly talking about movies and TV shows. View all posts by Keith Noakes

14 thoughts on “Hunt For the Wilderpeople Review”