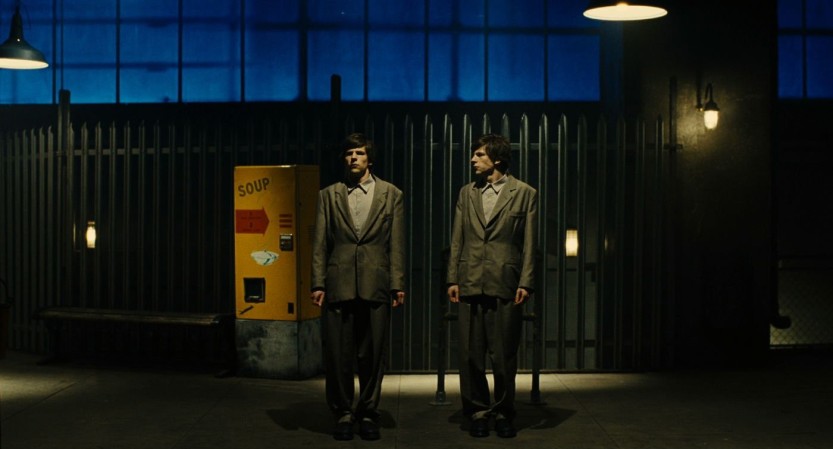 In an interview with The Guardian about his newest film The Double, Richard Ayoade nervously muses “Darth Vader is within all of us, and I remember that every time I shower.” The director of a new take on Fyodor Dostoevsky’s novella The Double (the film takes the same title) Ayoade is known to anglophiles everywhere as the lovably and laughably naïve nerd Maurice Moss from the British sitcom The IT Crowd. His quick wit and nervous humor serve him well in this adaptation which tackles the idea that we all, at times, wish we were something greater and sometimes that greater being is darker than we wish. An idea that is almost comically reflected in the difference between his comedic acting and much more serious directing.

Haunting shadows expertly shoot over bleak earth tones to immediately set the stage in the not too distant universe Richard Ayoade has created in his second feature film. The follow up to his debut feature Submarine, it is clear from the earliest scenes of The Double that Richard Ayoade is here to stay. The dystopian setting is reminiscent of Terry Gilliam’s Brazil, from the bureaucratic overlord referred to simply as “The Colonel” to the 1980’s style computers used in the office where the film’s protagonist works. Ripe with nods to famous directors such as Gilliam, Lynch, and Hitchock, The Double is Ayoade’s definitive announcement of “This is where I come from and this is where I’m going.” The use of the ambient sounds of the environment to drive the score and vice versa is unnerving and adds to these visuals in a chilling manner. Often, if a typewriter is clicking it will be looped to make up an eerie soundtrack for the scene. Likewise, if there is a repeating theme occurring in the score it is foreboding of a sound that will soon enter the consciousness of the scene.

Where the visuals and sounds set the stage in a stunning fashion, the acting sucks you into the world with surgical precision. Jesse Eisenberg plays the film’s all too meek protagonist Simon James. Simon is an office worker who is universally unnoticed by his coworkers and superiors alike. He has a crush on copy girl Hannah, played by Mia Wasikowska, who, like the rest, can’t even seem to remember his name. Wasikowska plays the role with the calm precision she showed as India in Stoker but, certainly not lacking in the jagged dramatic edges that jump out in The Double. Hobbled by his passive nature instead of a broken leg Simon takes to spying on Hannah’s conveniently located flat with his telescope making it hard to dismiss the reference to Rear Window. It is while spying on Hannah that Simon witnesses a faceless man committing suicide. This leads to a pseudo-date between the neighbors at Simon’s only other haunt, a greasy diner inhabited by a surly waitress, who also never remembers him. The only other inhabitant of note is a wall mounted old television who’s only programming is a low budget science fiction show that seems written exclusively for broadcasting motivation to Simon’s psyche. A common thread of The Double is Simon hearing only the most negative in everything and the science fiction program seems to be his only reprieve. 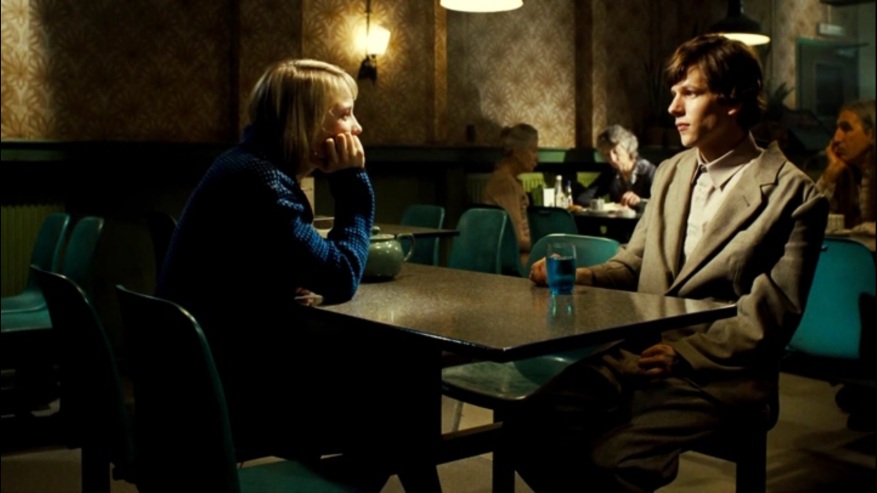 Eisenberg also plays the film’s antagonist James Simon, an exact physical replica of Simon James who’s personality is the polar opposite. The true delight here is the chance to see the depth of Eisenberg’s acting range unfold over the course of one film. As Simon he excels at the all too reserved, and some would say all too common, style we remember from The Squid and the Whale. As James we get to see more of the aggressive and silver-tongued Jesse Eisenberg that we loved in The Social Network and are desperate to see more of. The cast of characters out to ruin Simon’s life is rounded off by a host of actors Ayoade used in Submarine who all play their bits fantastically, especially Yasmin Paige as Melanie Papadopoulos, the boss’s crass gothic daughter who Simon is asked to mentor.

The Double is rich with dark humor that is perfectly subtle. It is one of the must see films of the year from a must see writer/director in years to come. Richard Ayoade is a young director and with this film should solidify himself in the critical eye for years to come. What new worlds will he bring to us? Will his style always be dark introspective comedy? Only time will tell.

2 thoughts on “Richard Ayoade Stakes His Claim With “The Double””