Whether you’re part of the light side or the dark side, everyone can mutually agree that the force is strong with J.J. Abram’s The Force Awakens.

In a time where sequels, prequels and reboots are more prevalent than original movies, I had reservations regarding the new Star Wars…until I heard Harrison Ford reaffirm, “Chewie, we’re home.” All my trepidation fell by the waist side, and I had faith in the force and in the direction of J.J. Abrams. The force is back, and it’s bigger and better than ever!

“It’s not a movie. It’s bigger than all of us. It’s almost a religion for people,” J.J. Abrams told CBS News

When the official trailer was posted online, it was viewed 112 million times in just 24 hours. “The stars totally aligned,” said Greg Foster, CEO of Imax Entertainment. “People have been rooting for this movie to be great since the first trailer. It’s just going to keep clobbering everything in its path.” Fans are ready for this new installment to the franchise despite the lingering memory of the deplorably obnoxious Jar Jar Binks and episodes I, II and III that left such a bad taste in our mouth.

The Star Wars prequels have become synonymous with absolute disappointment as a generation lost hope in the possibility of resurrecting the franchise back in the late 1990s.

Slate recently explained why the prequels didn’t live up to our expectations: “They’re just really bad movies in their own right. …A big part of the appeal of the original trilogy was the simple battle between good and evil… But the prequels were about trade disputes. Name a single good film ever made about a trade dispute. There was a lot of standing around talking about stuff and having votes in senates and generally not doing interesting things with lightsabers. It was dull—even worse, it was badly written dull.” 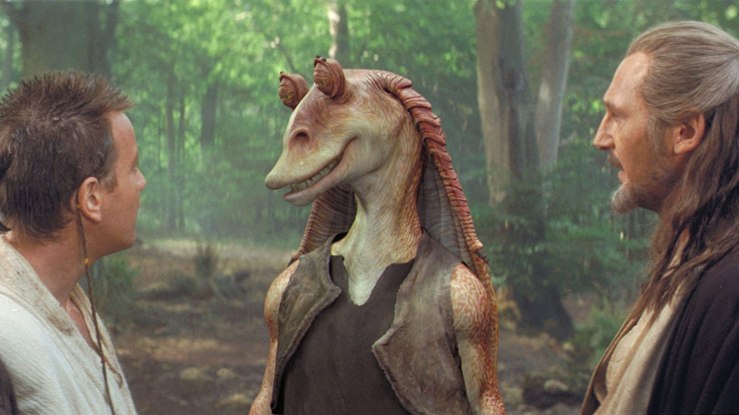 But despite the abomination of the three prequels, episode VII reinvigorates the franchise giving us every range of emotion, but most importantly, it gives us a sense of satisfaction. The original trilogy is a force in itself, and I can guarantee that fans will not be disappointed with the mighty impact that episode VII will bestow upon you.

Here are my top five reasons to believe in The Force Awakens:

Episodes I-III introduced us to an entire cast of new characters, all great actors, but characters whom we had little emotional investment in. And as episode I progressed to II and so forth, we still didn’t really care about them nor their plight, because the scripts were so sloppily written. Example: “Hold me, like you did by the lake on Naboo; so long ago when there was nothing but our love. No politics, no plotting, no war.”

The inclusion of some of the original cast to episode VII gave viewers all kinds of warm fuzzy feelings, because it felt like a broken piece of the puzzle was restored. The quirky and hilarious banter between Han Solo and Chewie is heartfelt and reminiscent of the original trilogy; it filled a void that was immensely lacking in the prequels.

Episode VII is a combo platter of both old and new protagonists that satisfy and bring together older and newer generations of fans. J.J. Abrams keeps the original characters high on a pedestal, which is exactly where we want to uphold them.

According to Lucas film president Kathleen Kennedy, when Harrison Ford and Chewbacca set foot in the Millennium Falcon set, every person on set was stunned. Kennedy claims that there must have been 200 people who were completely quiet, due to the iconic presence of Ford and Chewbacca back on Han Solo’s ship.

But while it follows similar beats to the original trilogy [very reminiscent of A New Hope], it treads carefully enough to be fully it’s own power house, borrowing pieces from the original trilogy, but not being a total clone. It gives all the feels of the old with a new generation twist for those less familiar with the franchise. All the beeps, bops and glow of the lightsaber continue to evoke loving feelings of the past.

While I want to praise John Boyega [Finn] for his work in the movie, Daisy Ridley [Rey] is the answer to our prayers!! She pilots the Millennium Falcon, she wields a lightsaber, and she’s one of the strongest female protagonist we’ve had on screen this year, or at least since Charlize Theron in Fury Road!  And don’t expect to catch  a glimpse of her in a gold slave bikini, because this shift of female portrayal is on par with the shift of the franchise…up-and-coming.

With the exception of Leia, the six previous movies have been all about the boys of Star Wars with little focus on female empowerment. The damsel in distress role is far too common and a total movie cliche. Like the independent and fearless heroine Leia before her, Rey handles a light saber with grace and poise and demands us to acknowledge her presence on screen. While she appears to be fearless, her reactions and expressions are as genuine as anyone making their first kill of a storm trooper. She’s a badass, but relatable at the same time.
The success of Daisy Ridley’s performance reminded me immediately of fellow British actresses Keira Knightly and Emma Watson who were both unknown actresses who dominated the screens in Pirates of the Caribbean and Harry Potter respectively and have had successful careers since. I think Daisy Ridley has every opportunity to be added to that list of successful unknowns. She is our new Ellen Ripley, Sarah Connor, Katniss Everdeen.

When the movie starts, the new scroll of texts ascends upon the screen and the booming, triumphant blast of the theme music begins, don’t be surprised if you get goosebumps, chills, tears, etc.

Composer John Williams, who won an Academy Award for the first Star Wars, is back — along with the iconic refrain he wrote 38 years ago.

To quote the LA Times: “Star Wars without John Williams would be like the Skywalker family without the Force: missing much of its power.”

And what a powerful atmosphere he creates with his score both old and new.

“I know everybody knows this, but when you actually think about what he’s composed, it is as important as any work ever done on any of those movies. When you think about Superman and Raiders and Jaws and Close Encounters—which came out the same year as Star Wars—and then the Harry Potter movies? He is just superhuman. It’s unbelievable that he is as brilliant and yet as modest as he is. It’s just an amazing thing to get to know that guy.” J.J. Abrams via Wired 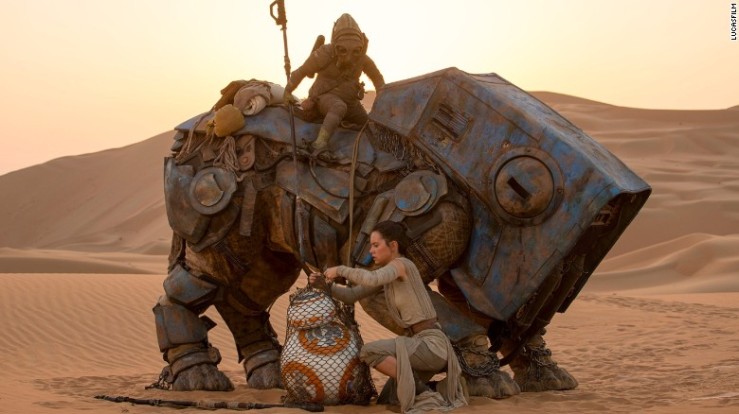 Cinematographer Dan Mindel does brilliant work with the film’s cinematography creating an authentic backdrop to this fictionalized world.

The production had a preference for using real locations and miniature models over green-screens and computer-generated imagery whenever possible in order to make the film aesthetically similar to the original Star Wars trilogy.

From the sunny, desolate look of the planet Jakku to the vibrant green forests for the planet of Takodana, the worlds are so realistic with their set locations and the minimal usage of a green-screen. Even the interior design for the scenes inside the Star Destroyer and the Starbase Killer were a marvel to explore in visual storytelling.

Taking his cue from the first trilogy, Abrams made authenticity paramount for the new installment. Shooting in locations like this desert in Abu Dhabi, the world felt more real with the homage to old-school shooting techniques. The sets were built from scratch … the explosions were real. As the director, he managed a cast and crew of almost a thousand. He set limits on computer generated imagery. Most of Abrams’ creatures, like the new droid BB-8, were crafted by hand, including his own.

In a letter to staff this week, Walt Disney Company CEO Bob Iger declared the opening of Star Wars: The Force Awakens this weekend to be “one of the proudest and most exciting moments in our Company’s history.”

I think credit should be given to the director who essentially inherited Star Wars, J.J. Abrams who, with his tremendous troupe, brought Star Wars back to life despite initially not wanting to sign onto the project.

While Abrams pays homage to the prequels, he said in an interview with Slash Film, “The original trilogy was for me what Star Wars felt like… What I loved about the original trilogy is how real it felt. I still to this moment can’t believe how it felt to look at the desert of what was supposed to be Tatooine and seeing these two droids walking along and no fantasy genre film had ever, in my experience, looked like that before. And suddenly this was real. … It was so miraculously visually authentic and it was one of the reasons why Kathleen Kennedy and I decided very early on, that’s what this movie needs to feel like. Which is why when it would have been easier and cheaper and faster to not go to Abu Dhabi, it wouldn’t have looked as good if we hadn’t. It would have been easier not to travel to Wales or to Ireland, Iceland or to build all these sets, exterior and interior, that we did… it was a piece of the puzzle that George got so unbelievably right in those first three films and it was really important to us that we adhere to that.”

Abrams successfully tackled the vast universe of Star Wars and made it his own. This is a blockbuster that I think is safe to say can be considered a classic of the year.