“If you could see your whole life laid out in front of you, would you change things?”

If E.T.’s landed on Earth tomorrow, what would you do? If you had the option to change the course of your life, would you do it?

Arrival is the most cerebral experience of 2016, and the intimate nature of the film has everything to do with that.

The film is not entirely original; it takes the age-old science fiction premise of aliens landing on Earth with the panicked world asking: “Why are they here?” But this sci-fi addition has all the right ingredients from it’s cast to director to score to script that produces some serious thought-provoking material. The exploration of this archaic, hypothetical reality leaves me wondering when this inevitable future will occur off-screen. I’m. Not. Ready.

After last year’s drug-cartel flick (one of my personal favorites of the year) Sicario, director Denis Villeneuve adds science fiction to his directing resume. Comparisons to director James Cameron have circulated online, and Arrival’s resemblance to Interstaller is unquestionable. The difference? This film feels more accessible and realistic.

When 12 extraterrestrial space pods mysteriously appear around Earth, the U.S. army enlists linguist Louise Banks (Amy Adams) to analyze the U.S. site in Montana in hopes of communicating with the aliens, known as heptapods (due to their 7-pointed radially symmetrical appearance). “Why are they here? Are they scientists, or tourists?” are the underlying world concerns as panicked nations are on the verge of global war.

We learn in the opening sequence that, like Sandra Bullock’s character in Gravity, Banks has lost her daughter to disease leaving her emotionally wrought. Amy Adams explains in a voice-over, “I used to think this was the beginning of your story.” What follows is a series of flashbacks of her daughter’s life from infancy to childhood to the argumentative teenage years. She continues, “I remember moments in the middle…and this was the end.” The next scene shows her daughter in a hospital bed and then the bed is empty.

Then the movie begins.

The Atlantic explains this sequence more accurately than I ever could, “The sequence—a brief life encompassed in still briefer summary—is surely among the most heartbreaking since Michael Giacchino’s magnificently versatile waltz carried us through the “Married Life” segment of Up. And while at first it appears to be mere backstory for Adams’s character, it is in fact much more, perhaps the most crucial thread in Villeneuve’s intricately woven film.”

Can a science fiction film be this year’s Oscar-bait? I asked myself that question immediately post-movie, and I realized the rarity of sci-fi recognition by the Academy.

Prior to 2007, only three such movies had ever been nominated for best picture: A Clockwork Orange, Star Wars and E.T. Arrival could easily be this generation’s Close Encounters, but it’s taking me a heap of effort to convince friends to see it.

What I’ve tried to explain is that Arrival is more focused on the societal response to fear and takes a deeper, intimate look at it’s female protagonist. It’s the anti-Independence Day, which focused on the chaos and Will Smith saving the world. It’s also the anti-Alien, which focused more on survival than world destruction.

Like Ellen Ripley in the Alien franchise, Louise Banks is a realistic feminine hero who uses her brains over bronze to solve international crisis. But unlike Ripley, whom we know very little about personally, we’re given a very intimate glimpse of Banks’s personal life. Even Ripley had a daughter she lost, but most audiences don’t know this, because the scene was ultimately cut. 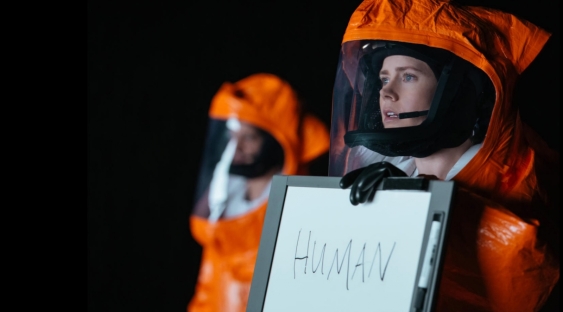 “We see to what extent the world is fragile when the slightest event — which is not ultimately threatening — what interests me is the human reactions. Faced with (the aliens’) approach, there is a paranoia that develops and a tension that develops, a disequilibrium. They’re there to teach something, but they don’t have a hidden agenda like in the majority of science fiction. Arrival talks very little about language and how to precisely dissect a foreign language. It’s more a film on intuition and communication by intuition, the language of intuition.” Denis Villeneuve via Deadline

The many layers and depth of Arrival make it profoundly more relevant in our world today than any other sci-fi I’ve seen in the last decade. There’s a scene of news coverage getting different global reaction-shots when panic strikes, and the image of “Save Our Species” struck me. Banks makes a pertinent point that rings true in the movie as well as our present-day reality, “What better way to force us to work together for once?”

Leave a Reply to Grog the Ginger Cancel reply