“Days ago I was with my family in my home. Now you tell me all is lost, tell no one who I am and that’s the way to survive. I don’t want to survive. I want to live.”

12 Years a Slave has only been in theaters a couple weeks, but critics who applaud or shun the film are both left with a common reaction when the credits rolled—stunned.

Since winning the People’s Choice Award at the Toronto International Film Festival, the positive response to the film has since been met with criticism and dissatisfaction toward the gruesomely realistic glimpse at the antebellum South. The film tells the true story of Solomon Northup (British actor Chiwetel Ejiofor), a free black man living in New York, who is kidnapped in 1841 and sold down the river to the owner of a cotton plantation in Louisiana. Many people are asking if we really need another slave movie?

But that’s exactly what it’s not. Director Steve McQueen’s 12 Years is not intended to re-expose the weakness of black culture’s roots nor is it intended to re-slap America on the hand bestowing another moral hangover. The argument “haven’t I seen this before?” is surfacing across the Internet, but the gravity of McQueen’s exposure of slavery as an economic necessity and the concept of slaves as property resonates far greater than any pre-Civil War period piece.

A 2011 CNN poll showed that when asked about the Civil War, around 1 in 4 Americans sympathized more with the Confederacy than with the Union. And 42% believed slavery was not the main reason the Confederacy seceded. Obviously movies are not responsible for the discrepancies in opinion, but the history of American slavery hasn’t received a fully honest portrayal prior to this year on film.

From Birth of a Nation to Gone With the Wind, inaccurate depictions of the South coupled with the romanticized Tara plantation life successfully covered the skeletons hanging from the bloody Oaks. In a letter to a fan, Gone with the Wind author Margaret Mitchell proved to have a skewed vision of the institution, “I am happy to learn that Gone With the Wind is helping to dispel the myth of the South that Uncle Tom’s Cabin created.” Since then we’ve been given the 1977 miniseries Roots (1977), which became the first real attempt at exposing the brutality of slavery, but faltered while focusing on the African American experience as a whole. Steven Spielberg’s Amistad (1997) uncovered the slave mutiny aboard the slave ship Amistad; however, it was another missed opportunity focusing on courtroom debate involving founding fathers and abolitionist lawyers. Fifteen years later Quentin Tarantino gave us the highly entertaining empowerment revenge story with Django Unchained, but ultimately proved more entertaining than a realistic portrait of history. 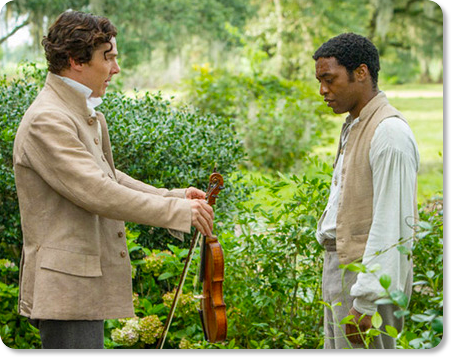 I too had my gripes with some aspects of the film; wanting just a little more and hoping for greater character development involving the relationship between Northup and other slaves. However, that’s not the direction McQueen wanted to take us in. McQueen carefully juxtaposes the evil and misery of slavery aside the beautiful, Oak-filled plantations. Like a fly on the wall, McQueen made me feel like a witness in the background of the monstrosity.

The film is carried by possibly the best ensemble cast I’ve seen this year— Michael Fassbender as the menacing slave owner was fully committed to the loony, inhumane and unpredictable behavior of Edwin Epps. Newcomer Lupita Nyong’o gave a more convincing performance of ultimate despair and desperation than most actors with Academy Awards under their belt. Chiwetel Ejiofor’s Northup was right on target–Ejiofor’s extreme close ups were uncomfortably intimate leaving me paralyzed in my seat. Sarah Paulson, who plays Mistress Epps, gives one of the most subtly haunting performances in the film which elicits an uncommon presentation of pure evil in her calm demeanor.

The majority of the film is unsettling to watch and crosses a visual boundary of unmarked territory that some critics couldn’t stomach.

“For McQueen, cruelty is the juicy-arty part; it continues the filmmaker’s interest in sado-masochistic display, highlighted in his previous features Hunger and Shame. Brutality is McQueen’s forte. As with his fine-arts background, McQueen’s films resemble museum installations: the stories are always abstracted into a series of shocking, unsettling events. Depicting slavery as a horror show, McQueen has made the most unpleasant American movie since William Friedkin’s 1973 The Exorcist. That’s right, 12 Years a Slave belongs to the torture porn genre with Hostel, The Human Centipede and the Saw franchise, but it is being sold (and mistaken) as a part of the recent spate of movies that pretend ‘a conversation about race.’ The only conversation this film inspires would contain howls of discomfort.” via Armond White, The New York Film Critic’s Circle

If the only conversation some critics can muster post-viewing contains howls of discomfort, than I must congratulate McQueen for tapping into a buried subconscious by exposing the reality of the real American horror story.

Other critics have found dissatisfaction in the film’s protagonist as an exception to the system who “wasn’t supposed to be there, and his captivity ended with him reunited with his family—makes it, on one level, a familiar story: One man survives the odds, through some unbreakable psychic integrity.” The notion that American entertainment “understands suffering is as a prelude to catharsis” is based on a cinematic pattern that even Stanley Kubrick, a friend of Steven Spielberg, pointed out with Schindler’s List despite his admiration of the film, “Think that’s about the Holocaust? That was about success, wasn’t it? The Holocaust is about 6 million people who get killed. Schindler’s List is about 600 who don’t.”

When asked why he wanted to tell the story of Solomon Northup, McQueen said, “I live in Amsterdam, where Anne Frank is a world treasure. [When I found this book,] I thought, ‘My God, this is Anne Frank, but 100 years earlier. Why did I not know this book?’ But then I found out that hardly anyone knew this book; in fact, all the people I spoke to had no idea of the existence of this book. No one. And that’s when I made it my passion to make this book into a film.”

In response to following a protagonist who survives versus the story of the masses, McQueen said, “The reason I took this angle is I wanted that person to be everyone in the audience. Someone who can take you, the audience, in this unfortunate conveyor belt of slavery. This is a story about one of the harshest structures that’s ever been created in the history of the world. It’s somebody trying to survive that with their mind intact and they do.” 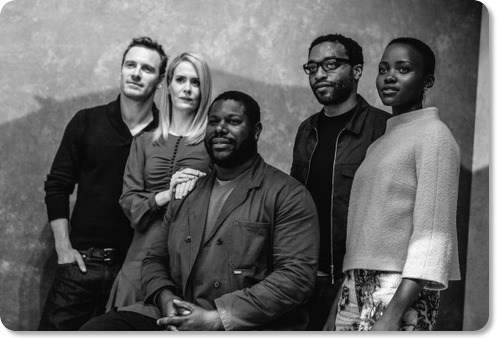 Whether or not audiences relate with one hero in slavery versus the masses enslaved, one point is undeniable—it’s not only an important film, it’s a necessary one. This film offers a new platform of vital importance to our history—could it preach to the unconverted or educate those with little knowledge on American slavery? And, more importantly, how adequately has the South learned from its greatest shame?

21 thoughts on “The Importance of 12 Years a Slave”