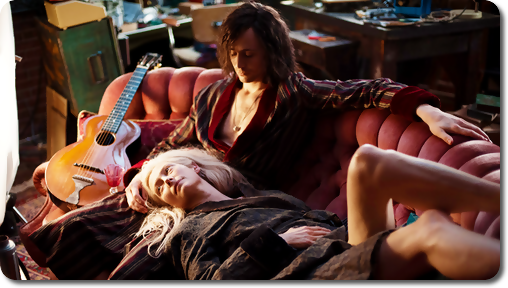 “How can you’ve live for so long and still not get it? This self obsession is a waste of living.”

If any genre of as been over-explored in our culture, it’s the blood-sucking, vampire genre. But indie director Jim Jarmusch offers a melancholy, hipster-driven film that pushes the boundaries of love for centuries between two outsiders living in the shadows.

The lovers are underground rockstar Adam (played perfectly by a cooly morose Tom Hiddleston) who lives in Detroit and Eve (played by Tilda Swinton, worldly and knowledgeable) who lives in Tangier. The couple lives apart, but remain deeply in love after being married for centuries; their love remains timeless as the world around them constantly changes. After reuniting in Detroit, their lowkey lifestyle is transformed to chaos with the visit of Eve’s wild-child sister Eva (a careless freespirit played by Mia Wasikowska).  Her senselessness and greed is a reckless endangerment to the family, and to the crimson supply of “good stuff” Adam and Eve survive off of.

What makes these vampires unique is their non-violent approach to ensure blood is available during feeding; Adam works the graveyard shift in a hospital where he trades substantial amounts of cash for blood samples to take home. Adam lives his life as a total hipster–tormented by humans (he calls them zombies) whom he believes are rotting the world. Unlike Eve, he’s unaccepting to the ever-changing culture. “I’m sick of it–these zombies, what they’ve done to the world, their fear of their own imagination.” 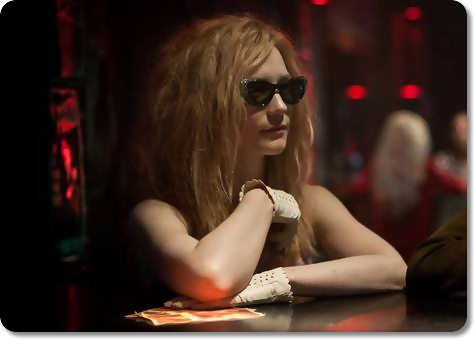 So why would director Jim Jarmusch explore a genre that’s already been oversaturated in our culture?

I just like genres, it’s one that I’ve always liked. I really like the whole history of vampire films that are more the kind of marginal, the less conventional ones. Starting with Vampyr by Carl Dreyer in the ‘30s, and many, many interesting films – Shadow of the Vampire with Willem Dafoe, then in the ‘80s the Hunger with David Bowie and Catherine Deneuve. I liked George Romero’s film Martin a lot, Katheryn Bigelow’s film Near Dark, Abel Ferrara’s The Addiction, Clair Denis’ Trouble Every Day, Polanski’s Fearless Vampire Killers. I loved Let The Right One In—that was from like five, six years ago, beautiful. Yeah, I’ve always loved all of those films, that type of approach. Rather than the sort of more obvious one and I wanted to make a love story for quite a long time. It’s had different variances to it, but somehow it got merged maybe eight years ago into my vampire film. So, I wanted to make a love story that involved vampires. The possibility of having a historical overview was really interesting to me, because there’s a point where [Mia Wasikowska’s character] calls them snobs, when they’re throwing her out of their house, which on a certain level they are. It’s important it’s in the film, in a way. But who wouldn’t be considered a snob if you’d been alive for a thousand yeas and had all of this knowledge and accumulated experience? That’s ten, twenty times as much as any normal person. The idea of seeing history in a timeline by having lived through it, but from the margins, from the shadows: observing it half in secret is very interesting to me. I’ve always been drawn to outsider type of characters, so what more perfect shadowy inhabitants of the margins are there, than vampires? Who are not undead monsters, by the way, they’re humans that have been transformed and now have the possibility of immortality, but are reliant, like junkies, on blood. Director Jim Jarmusch via IndieWire 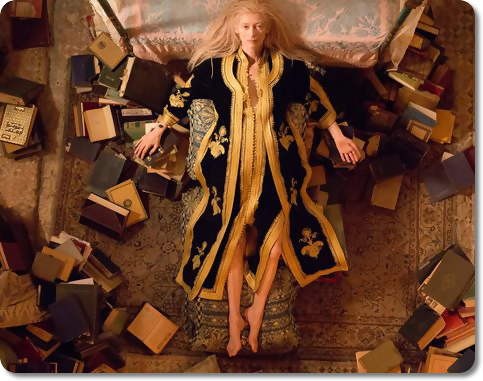 Music is also a huge component to the film to the point that it almost puts you in a sedated trance. Margaret at Cinematic Corner featured the score on her soundtrack series–check it out. Jarmusch’s band SQÜRL compose the score, together with experimental lute player Jozef van Wissem, and there’s a show-stealing live number by Lebanese singer Yasmine Hamdan.

But my favorite component of this film is the unyielding affection and devotion of vampires Adam and Eve. Tilda Swinton summarizes their love best:

“Adam and Eve are kind of a radical proposition. They’re really different. One of the most beautiful things that the film can offer is this portrait of two people who are really in it for the long haul, and who are really distinct from one another but dig each other all the same. Even though they drive each other crazy in different ways, they stay with one another and don’t try to change each other or edit themselves. They just live alongside one another.

There is a sort of romantic myth about oneness in so many movie relationships. By the end credits, they come together in a mesh of identities, as one, and that is the end of the story. This isn’t about oneness. It’s about partnership, which means twoness, and I love that.

It’s based on a book by Mark Twain called The Diaries of Adam and Eve, which is really the root of the characterization of these two. He’s super grumpy and she’s sort of a space cadet who’s really positive and doesn’t see the downside, ever. It’s really beautiful to see how they operate together.” Tilda Swinton via Complex.com 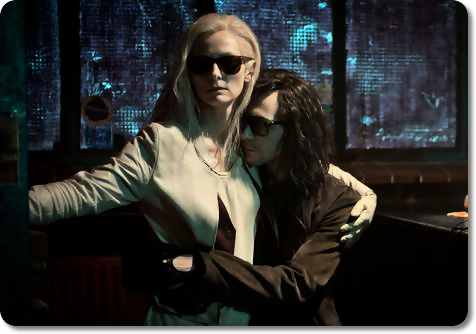