“There’s only one way this ends. Last man standing.”

The hard-hitting, nerve-killing technical achievement that is 1917 is now in theaters, and it offers a look at the trench warfare from WWI in an all too realistic ride. Make sure to pack your anti-anxiety medication for this one, because 1917 will have you white- knuckling, teeth grinding for 110 solid minutes.

Don’t listen to critics saying this movie is too “boring” to be considered great, memorable, or even a best picture Oscar winner. They’re over-analytical snobs, and I’ll tell you now how wrong they are. 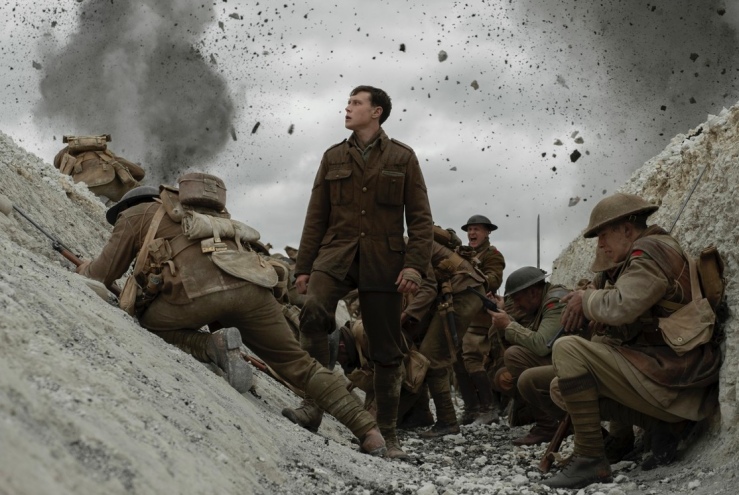 1917 may not be the greatest war movie of all time (note: do NOT think nor try to go into this comparing it to a WWI Saving Private Ryan), but it’s certainly the best at depicting WWI trench warfare. If my recommendation doesn’t persuade you enough to watch it (if you haven’t), then you should know that it’s nominated for Best Picture at this year’s Academy Awards. Currently, 1917’s odds on winning that category is +240, trailing slightly behind Once Upon A Time In Hollywood.

The premise is two young (teenagers y’all!) British soldiers during WWI are given an impossible mission: deliver a message deep in enemy territory that will stop 1,600 men, including one of the soldiers’ brothers, from walking into a deadly trap.

It’s very much a ‘learn from the past so you don’t make those same mistakes’ movie as described by director and writer Sam Mendes (American Beauty!!). The story is also a direct inspiration from Mendes’s grandfather who served from 1916 to 1918.

It shouldn’t go without mention that this movie is a great balance between war as well as humanity. Yet, some critics missed the point of this darkly gripping experience entirely citing the movie as a hollow, missed opportunity. Someone even took it as far to say it felt like a series of Call of Duty cut scenes, a video game with no control. Lol, okay. Let’s explain.

1917 is a massive technical achievement done right…special shout out to cinematographer Roger Deakins for this one. The camera tracks these two soldiers with a smooth one continuous shot for 110 minutes (read: the camera never stops…sort of), and it’s totally brilliant.

The movie borrows its hidden cuts from a technique first seen in Alfred Hitchcock’s Rope (1948). Like that film, Sam Mendes would move the camera behind an object during a scene, such as a tree or burnt out building where the camera could be stopped then restarted without a noticeable edit.

Why was it important to film as a single shot? According to Mendes, you’re not given much background to these two characters, so the one shot technique gives you their step- by-step experience on this mission. Literally. It’s one of the realest and rawest experiences I’ve had in a theater in a very long time.

Is this the best movie of 2019? It depends on who you’re talking to, and how one merits a movie as the best. This is certainly in close competition for me with Jojo Rabbit, but while both movies showcase the horrors of war, they’re achievements in their own rights.