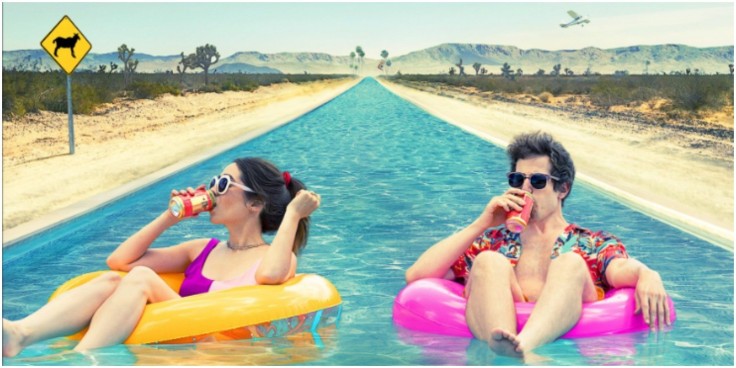 “I guess you followed me. It’s one of those infinite time loop situations you might have heard about.”

With the monotony and solitude of life in quarantine, what better way to spend your time than getting sucked in the time loop rom-com Palm Springs?

Yes, your reservations of the Groundhog Day genre trend is totally acceptable; however, this spin is a fresh take of fun we’ve been waiting for. Don’t doubt me, because my attention (or lack thereof) has peaked in 2020, and Palm Springs brought me back to life.

When carefree Nyles (Andy Samberg) and reluctant maid of honor Sarah (Cristen Miloti) have a chance encounter at a Palm Springs wedding, things get complicated as they are unable to escape the venue, themselves, or each other. Insert new take on the old time loop formula.

Palm Springs launched July 10 on Hulu, and who woulda thunk that Max Barbakow’s movie debut would be record breaking, but it is! A spokesperson for Hulu confirms with IndieWire the film broke the streaming platform’s opening weekend record by netting more views over its first three days than any other film on Hulu during the same period.

Unbeknownst to me, the movie actually debuted at the Sundance Film Festival in January selling to Hulu and Neon for just over $17.5 million, making it the biggest deal in the history of Sundance. Palm Springs beat out the previous $17.5 million Searchlight Pictures paid for Nate Parker’s The Birth of a Nation (barf) at the 2016 festival. Neon opened the film in select drive-in theaters on the same day it launched globally on Hulu.

This film was originally supposed to play at more film festivals around the world and eventually receive a theatrical release, but things being the way they are, Hulu has now released it.

There’s not only that mega hype, but it’s also the most streamed movie over its first three days of release on Hulu, and holds the biggest social media interest in a Hulu original movie over the debut weekend!

This movie concept may feel like déjà vu, but trust me, it’s awesome. And FUN. So fun, in fact, that I felt like I was smiling the entire runtime. The cast kills it; both Samberg and Milioti are absolutely hilarious, and a match made in comedic heaven. I can’t forget to mention J.K. Simmons has a supporting role, and he steals every scene he’s in.

“I liked it — it’s very rare,” Samberg told TheWrap’s Beatrice Verhoeven at the festival. “There are a lot of scripts written and not a lot that I personally like when I read them. [There are] many that I don’t enjoy and then like the movie when I see it later. This one was just super fun and funny and different, it felt like a way to do something that could be considered a rom-com but not in the traditional way. It was… a little more f—ed up.”

The Groundhog Day inspired setup has been redone countless times throughout the years (most being stale and mediocre), but Palm Springs presents so many fresh ideas that it’s impossible not to love. Don’t doubt that you’ll likely see this movie on my future top 10 list of 2020 in a year as bizarre as the movie’s concept.