I think we all saw this coming.

On the upside, Kate Beckinsale is a badass, and when she’s not hindered by the writers, with their pesky “plots” and “words,” she’s awesome to watch. Fans of the original, don’t even play: you know Sharon Stone vs. Arnold Schwarzenegger was a joke. Not so here: Beckinsale’s Michael Meyers-like omnipresence may be eyeroll-inducing, but it’s worth it to watch her put the smackdown on Colin Farrell and Jessica Biel.

Because THOSE two. I cannot EVEN with those two. Zero chemistry, bland, bland, bland. I’ll concede that this isn’t a deep character study, but Biel has ZERO personality, she’s just a walking trope.

Colin Farrell is really not in his element as the doe-eyed, “But I wanna be GOOD!” guy. And his awkward attempts to deliver the quasi-philosophical lines (“An illusion, no matter how convincing, is still objectively just.. an illusion.” very deep, Colin) are painful.

Bill Nighy earns his paycheck and carries Farrell through a scene, but sadly that’s all we ever see of him. In his place, we get a completely RIDICULOUS showdown between Farrell and Bryan effing Cranston. Now I love me some Cranston as much as the next guy, but how in the world do they expect me to believe that this aging politician can put up a more than decent fight against a man half his age? Who is supposedly THE GREATEST AGENT ALIVE?

That’s a symptom of a larger issue: the action, for all that it’s meant to be a huge draw, is a disappointment. No one is going to be at the edge of their seats while watching Jessica Biel pilot an arcade game-cum-flying car in front of a green screen, or jump from one flying cube to the next in the most random and physics-defying (this 100-square mile spinning elevator room is all… underground? inside that ONE skyscraper they went into? who knows) chase scene of.. this part of the movie.

But more importantly: director Len Wisemen simply has no understanding of what makes action work. As Film Crit Hulk points out in his excellent 3-part series, great action depends on a number of things including audience 1) ANTICIPATION 2) UNDERSTANDING 3) FEELING 4) REACTING.

We don’t get any of that. Take for example the action scene in the trailer, where Farrell’s character takes down a room full of guards using instinct alone: it’s mindless action. Farrell easily takes them out, and there’s never a pause or a moment for the audience to fully understand the shocking implications of what he’s doing. We’ve seen that he’s a muscular guy (hello, obligatory shirtless scene); he then gets attacked, and beats some guys up. Who cares? We knew it was coming, we never had any doubt he could do it, and it doesn’t emotionally affect the audience in any way. We’re not impressed, relieved, anxious, or excited.

And that audience apathy goes on for pretty much the entire film. I’m willing to suspend my disbelief at the complete absurdity of a high-speed train traveling through the center of the earth, but you have to give me some incentive to do so. The rest of the movie has to be good – or at least FUN – enough to distract me from the funny science. But the action scenes, romance, and plot (the president of the WORLD is leading this invasion? yeah that sounds realistic) are of no interest to me, so I’m forced to find other things to occupy my mind. Like so:

“Hmmm.. so, they pass through the earth’s core and the ship immediately begins decelerating… Then it takes about 3 minutes for them to get to the surface, and the earth is maybe 8000 miles in diameter… so 4000 miles in 3 minutes would be… like… (full disclosure: I used a calculator later >.<) 80,000 miles per hour. Yet somehow Jessica Biel is able to climb a ladder on the outside of the ship at this speed? OH COME ON.” 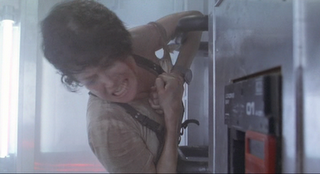 I forgave Ripley’s unbelievable elbow-strength when she managed not to get sucked out into space, but Jessica Biel ain’t no Ellen Ripley. (sidenote: HOW IS THERE NO YOUTUBE VIDEO OF THIS SCENE?!)

Probably the most annoying part of this movie was how poorly they handled the “is this real or Rekall?” theme. I want to be unsure! I want to wonder! I want to DEBATE it!
I say again: Total Mess.

View all posts by Tippi

16 thoughts on “Total Recall is a mess.”