Unlike Greek mythology, which was characterized by the meddling of gods in the affairs of mortals, Norse mythology centered more on the gods’ conflicts with each other and with other mythical beings, such as giants, world-encompassing sea monsters, eight-legged horses, dwarves, and elves.

While not quite as popular as Greek myths, tales of Norse gods have made a bit of a comeback in recent years. You might be surprised to see some of the films that draw inspiration from those legends.

Thor
This movie’s connection to Norse mythology is clear. Thor is up-front about its origins, going so far as to hire one of two famous Swedish actors working today, Stellan Skarsgard (the other being his son, Alexander, obvs), to explain Thor’s place in the Norse pantheon of gods. They get the basic characters right: Thor, god of thunder, is son of Odin, the ruler of Asgard. The realm of the gods (Asgard) is connected to earth (Midgard, or “Middle Earth,” if you will…) via a rainbow bridge guarded by Heimdallr.

They didn’t have time to delve into any traditional stories, and while Thor’s “the universe IS the tree!” explanation is compelling, I much prefer the beauty and artistry of the Nine Worlds as depicted in mythology. Overall, Thor is a campy but respectable, and highly entertaining, comic book movie that gives viewers a bare-bones education on Norse mythology. Can’t ask for much more than that.

The Mask
You all knew this one, even if you didn’t know it! Remember, Ben Stein (of “We all wear masks, metaphorically speaking”) tells Jim Carrey that the mask itself is meant to represent Loki, the Norse god of mischief. That’s pretty much where the connection peters out, and the rest of the movie is just a ridiculous (and hilarious) romp.

The Thirteenth Warrior
Not quite falling under Norse mythology per se, this movie (and the Michael Crichton book it’s based on) did draw inspiration from a Norse legend. In this adaptation of Beowulf, Antonio Banderas helps the Vikings fight off an enemy meant to represent the monster Grendel. It also features an amazingly ridiculous scene in which Banderas, playing the 10th century Arab traveler Ahmed ibn Fadlan, learns Norse just by “listening.” The Vikings also make fun of his tiny little Arabian horse (don’t worry, those bullies eat their words!). This movie was technically a flop, but I enjoyed it, for all the cheese-tastic-ness.

Harry Potter
This is kind of a cheat, since J.K. Rowling drew inspiration for her character names from every source imaginable. But Fenrir Greyback at least can certainly be attributed to Norse Mythology. Fenrir was a monstrous wolf, the son of Loki foretold to kill Odin in the final battle (Ragnarok). Fitting choice to be the namesake of a bloodthirsty werewolf. 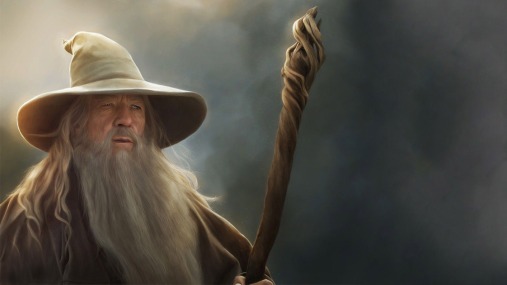 Lord of the Rings
You may already know that Tolkein was something of a linguistic savant. He was familiar with over 20 languages, many of them dead, and used that knowledge to construct the languages seen in “The Lord of the Rings.” He majored in philology (the study of languages in historical texts) with a specialization in Old Norse; his study of Beowulf had a major impact on the field. He deeply loved mythology, believing that the stories themselves – not just their deeper meanings – were very important, and took influences from the fantastic elements; aside from taking many of the dwarves’ names, and even Gandalf’s name (which means “magic elf” in Old Norse), from the Norse, he took the very idea of elves, wizards, enchanted rings, shieldmaidens, and dragon-slaying. He stated outright that he considered Gandalf to be an “Odinic wanderer,” as Odin was said to take on the guise of an aged traveler.

Full disclosure: I’ve never actually seen Valkyrie. But I wanted to draw attention to the name itself, which refers to the Norse legend of female warriors who escort slain warriors to Valhalla. Everyone will recognize the “Ride of the Valkyries” from Wagner’s opera, as popularized by Apocalypse Now, as well as the reference to the Valkyrie Brunhilde, of “It’s not over till the fat lady sings” fame.

How to Train Your Dragon
This is a cute story about a boy living in a Viking village who’s raised to fight dragons, but ends up befriending one instead when he can’t stomach killing it. While you don’t see much of the mythology itself, the Vikings make several references to the gods Thor and Odin.

As you can see in all of these examples, modern interpretations of Norse mythology take a few elements of the classic stories and set them into more “relatable” tales featuring human protagonists. No one makes movies about Loki’s wager with the dwarves, or how Odin traded his eye for a draught from the Well of Wisdom, or how Thor tried to wrestle an old woman to the ground, not realizing that he fought against old age itself. But while you may not see a faithful retelling of those stories, you can certainly find hints of the old Norse legends if you keep a sharp eye out.

View all posts by Tippi

17 thoughts on “Mythology in Movies: The Norse”