Thanks to Wendell @Dell on Movies and KG @KG’s Movie Rants for putting together the Against the Crowd Blogathon!

Here are the rules:
1. Pick one movie that “everyone” loves (the more iconic, the better). That movie must have a score of at least 75% on rottentomatoes.com. Tell us why you hate it.

2. Pick one movie that “everyone” hates (the more notorious, the better). That movie must have a score of less than 35% on rottentomatoes.com. Tell us why you love it.

3. Include the tomato meter scores of both movies.

4. Use one of the banners in this post, or feel free to create your own.

5. Comment on this post, or on KG’s Movie Rants with the two movies you intend on writing on.

Everybody Loved But I Hated… 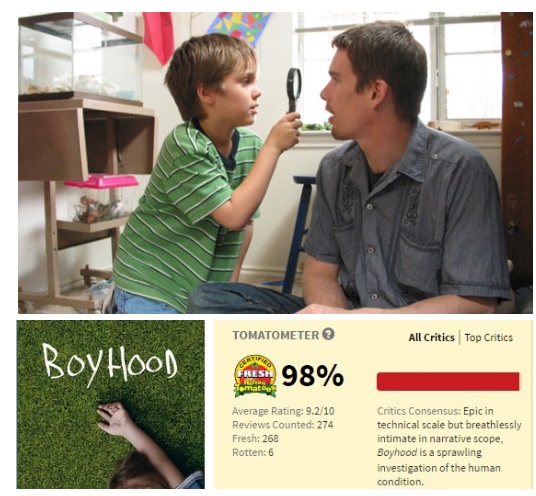 Two years ago I declared Boyhood to be the most overrated movie of the year, and I still stand by that statement. At the Academy Awards, it was a battle of the best between Boyhood and Birdman; the latter deservingly taking home the gold and glory.

With a nearly perfect 98% rating on Rotten Tomatoes (only five critics out of 258 dared to negatively review) and a 100% ranking at Metacritic (ranks as the highest scored new release for at least this century at Metacritic),  New York Times film critic A.O. Scott hails Boyhood as “one of the most extraordinary movies of the 21st century.” And I’m left here wondering…why?

Director Richard Linklater (Dazed and Confused, Before Trilogy) chronicles 12 year’s in the life of Mason (Ellar Coltrane) where we literally watch him mature on screen. Linklater’s 12-year filming project touches groundbreaking territory using the same cast transforming and molding the characters based on the development of the child actors. The film includes notable performances by Ethan Hawke and Patricia Arquette, but those performances couldn’t save a film that I thought coasted on neutral for the entirety of the movie. Sure, it’s a glimpse into one boy’s life, the chaos of divorced parenthood, the struggles and inadequacy of “finding yourself” … but the ups and downs of the movie are minimal while the plot flatlines for three hours.

I appreciate Linklater’s ambitious project, but this monotonous movie is by far a crowd-pleaser I’ll never understand. Patricia Arquette took home the Academy Award for best actress, another nod I don’t fully understand, because the performance wasn’t her best. It was a comeback if anything. I know I’m in the minority on this one, but I just wanted something with a little more depth.

Everybody Hated But I Loved…

Practical Magic is one of my guilty pleasure movies that I watch almost every year. It may be a calculated chick flick, considered garbage by most, but it introduced the world to the holy union of Sandra Bullock and Nicole Kidman, midnight margaritas and that being normal isn’t a virtue – rather denotes a lack of courage.

Practical Magic is a 1998 rom-com oozing with 90s appeal; witches were then what the zombie craze is now. The film was directed by Griffin Dunne (who?) and stars Sandra Bullock, Nicole Kidman, Stockard Channing, Dianne Wiest and Aidan Quinn. It also features a young Evan Rachel Wood and Camilla Belle.

The movie follows the Owen sisters, Sally and Gillian, as they struggle to use their hereditary powers to overcome obstacles in discovering true love. Cliche? No matter.

The general reception to this film in the 90s wasn’t well-received by critics who called it Hollywood fluff, an absolute waste of time and an uneven adaptation of the novel it’s based upon. This decade provided some of the best Hollywood fluff, a genre that we don’t see in the current day, or at least nothing good enough worth remembering. I yearn for this type of movie fluff to return to theaters…instead we get reboots and remakes galore.

According to Sandra Bullock in the DVD commentary, in the scene where the Owens women are drunk and slinging insults, the actresses actually got drunk on very bad tequila brought by Kidman.

It’s a very overlooked film, but I argue that the performances and chemistry by all involved is complete A-game despite some of the cheesy dialogue.

The movie also features an incredible soundtrack with the likes of Stevie Nicks, Joni Mitchell and 90s newcomer Faith Hill.

It may be a flawed film, but I’d take a movie like this any day over another disaster blockbuster like Suicide Squad. Bring on the fluff!

22 thoughts on “Against the Crowd Blogathon”